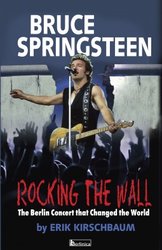 A concert that helped breaking down the Berlin Wall – a book with the full story of Bruce Springsteen’s show in East Berlin on 19 July 1988. In the introduction the author had doubts if it’s worth to write a whole book about a single concert. After all I should say: absolutely.

He showed the reader the proper political situation, the direct preludes and the show itself. The presentation of the political aspects is absolutely authentic and detailed on that exact level, which the reader needs to understand the situation. We could see exactly that the political leadership in East Germany is more rigorous than the others (e.g. the Hungarian), and young people felt frustrated themself because of this situation. This is precisely why the Free German Youth, an arm of the Communist Party wanted to organize concert shows with international rock stars like Bryan Adams or the Depeche Mode. But the Bruce Springsteen show caused the opposite result: the audience didn’t feel that the socialism would be “livable” more, but it gave them hope and courage, a kind of fuel for the revolution.

The author asked many organizers and fans about the concert, one of them was Springsteen’s manager at that time. We could get to know the background details of the show, for example both the Springsteen-team and the Free German Youth felt the basic idea as their own. Another interesting circumstance was that the organizers made a compromise to establish the concert: they advertised the concert as a help to Nicaragua, another socialist country that had a tough time that days. Springsteen learned this only a day before the show and almost cancelled the whole thing. Finally he and his management has been convinced that it was just a gesture to the country leaders, but the related banners in the stadium were ripped off completely.

The book shows Springsteen’s personal relationship to the country, for example he was in East Berlin in 1982 as a civilian and before the concert in 1988 he and his girlfriend walked around the city with their translator again.

Many fans told their story about the concert, for example about how they arrived: many of them didn’t have tickets, and they were waiting for hours without anything to eat and drink. The huge crowd broke a fence before the concert – it was undoubtedly political behavior that time. There were about 300.000 people in the audience, which is a formidable crowd, and millions of East Berliners saw the show on television as well.

It’s a well-known fact that Springsteen isn’t just an excellent singer and musician but a very good performer who makes a close contact with his audience. In East Berlin he gave a short speech in German about the barriers that will be broken down between the countries – the book reports about how the manager solved in the last second that Springsteen changed the word “walls” to “barriers” due to the political risks. Speaking against the Berlin Wall, from behind the wall, only a few people were able to do that, it was an exceptional event in the history of the country and in Bruce Springsteen’s life too.

After you have read the book, you can find the most interesting moments on Youtube, for example that is the speech and after that Bob Dylan’s Chimes of Freedom:

Only the last part of the book is boring a little, it is about the period after the concert, when so many people keep telling the same and express what this event meant for them. But the overall effect is great: the reader became enthused with the author and the people in East Berlin, who sang together with Springsteen zealously that “Born in the USA”…