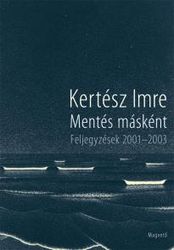 It is a cliché that blogging is not a genre, just a content management system. But if blog-writing would be a genre, these would be is main components: minimum two entries per week, a main subject with some subtopics, one author, personality. Exactly the same things characterize this book.

The main subject is the anti-semitism in Europe and especially in Hungary between 2001 and 2003. The author is convinced that Europeans want to kill Jews even nowadays. I don’t think it would be the truth, but this is perfectly understandable from the writer’s point of view, who survived Buchenwald. Fortunately his days now pass normally, he travels around Europe (before the Nobel-prize!), dines in restaurants, visits other writers; it is a highbrow lifestyle, suitable for a popular writer.

He works on his actual book, it is hard for him to work on that, the novel continually reshapes itself, but finally he manages to finish it, and it is published. Kertész works for about a decade on each of his relatively short books. Interesting to imagine, what the reader was doing ten years before, and how many things happened in one’s life over  this period.

We are in October of 2002, when he wins the Nobel-prize, but it doesn’t seem to change his life. There is a short period – half a year -, when he is more busy, but after that he continues his usual lifestyle of travels and dinners. He and his wife gradually move to Berlin, where he doesn’t feel the hatred and monotonity that characterized his life in Budapest. He doesn’t want to be Hungarian, but he can’t write anything of such high standards in any other language.

He has an inchoative paralysis, so he writes on a computer, in this way the trembling of his hand causes less trouble while he writes. And he writes this book the same way like ego-bloggers, but he is not an average blogger. He is a great writer, all of his words are important. Even so it would be better if he had a specific aim with writing this (MS Word?) document. For example focusing on politics, the difficulty of writing, his Nobel-prize, or just keeping the whole document to be a daily diary. He masters all his topics marvellously – but it would be better if he chose just one to master.