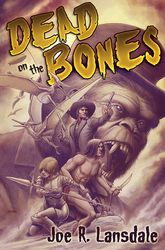 Fandom of pulp, tributes to other authors and enjoying to wear their skins – it had to be a joyful experiment to Joe R. Lansdale to write stories in other author’s universes. It’s joyful for the reader as well – but only if he is a fan of the originals too.

The first story connects Sherlock Holmes with Frankeinstein – without naming any of them. It’s an exciting investigation going into a scary end, and even good to see how Sherlock “Dupin” explains the background of the monster.

In the 2nd there’s a reverend fighting with a vampire, a simple and ordinary story. The next mixes so many strange things that it’s hard to handle: a girl on the icy Mars, running from an ice-shark, finds a pyramid, finds an ancient civilization, and at last delivers a life-saving vaccine to a village…

Naked Angel was good again, a noir-style investigation in case of a murdered woman, who was encased to a block of ice. A cop finds some personal connection to the woman, without realizing the danger waiting for him…

The next is a box match in a forest, combined with a family drama, combined between living and dead – good story again. After that arrives Tarzan to a forgotten land, without any interesting moment. And at last two long fantasy stories about two guys with pretty similar circumstances: they are gotten to a world with trees, enemies and beautiful ladies.

I admit I couldn’t always identify the original universes, but my excuse would be that their style is even far away from each other. All of them are good for the related fans, but for them only. I’m a fan of Sherlock, Tarzan and Los Angeles cops – but I was bored during the last two, very similar fantasy story around trees and swords.

Disclaimer: I received an advance review copy of this release from NetGalley in exchange for an honest review.