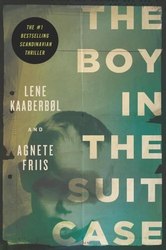 The basic situation of the book is that somebody found a naked and stunned 3 year old boy in a suitcase, in this situation the first thought of every parent would be, that it could have been his child. Apart from this, I can recommend the book for parents too, because the little boy was really robbed and stunned, but besides this nothing bad will happen to him.

There are two main plots in the book. The first is about the boy’s mother, who is acting like every normal parent in the world. That’s all right, but a little bit boring, mainly while the reader doesn’t know anything about her past. The other plot’s main character is Nina, who found the boy in a suitcase, naked and stunned. What does a sane man do in this situation? … Well, but Nina doesn’t trust in the authorities, but I think it would be better if she didn’t try to save someone else’s child on her own way.

So the first main plot is boring, the second is irritating, but there are two more sub plots, the stories of the robber and that of the millionaire who initiated the robbery. The story of the robber is the best part of the novel, he is the most interesting character, because of the chance of his personality-development. What would have happened if the big, bald Lithuanian guy had chosen another way? Over all, the one and only likeable character in the book is the victim, but he hasn’t got a hard way either, for example he got an ice cream at a point of the story because of the heat, so we don’t have to worry about him.

The book won the Best Thriller prize of 2008 in Denmark, probably because of its professionally written style. The stories of the characters are changing from scene to scene, that makes the reading very fast and exciting. The full story is unfolded gradually, and this holds the reader’s attention in a high level while reading the book. I think the authors wrote the stories separately, and after that they mixed the scenes after each other. Choosing this solution, they needed to throw away all the boring scenes, so they did. There are many cliffhangers too, and just some of them are a bit constrained. So it is a very exciting book, maybe just the main character Nina should be less silly…