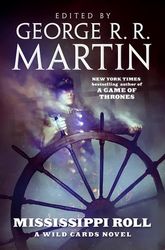 This story is about a journey on a steamboat, which is still running the Mississippi in the 2010s. Our main character is a ghost, who was the first owner and captain of the boat. He had lived in the 50’s, when he had a debt on the boat, and after a rough argument with a debt-collector a shooting started, and both the collector guy and the young captain died. But the captain remained on the boat as a ghost, also he was closed on to it, the boat became his prison for eternity.

There are some illogical switches in the baseline of the story: Wilbur remained able to communicate with the crew, why he hadn’t been able to achieve that somebody inform his wife that he is still “alive”, at least he is on the boat? Or how a new captain could ignore the resident ghost at all?

Anyway, the actual story plays in the 2010s, when joker refugees arrived to the United States. The parallels of our days’ refugees are clear: the refugees are escaping from persecution in a foreign country, the USA does not want to let them in, and some – already familiar – aces are trying to help them. The refugees are smuggled to the boat at last, where their story-lines met with Wilbur’s and the adventure begins.

Every story is about another character on the boat, and every character is involved to the fate of the refugees. There is a singer-magician from a joker boyband, a private investigator with his wife, an old, gay barman, and all around is the staff with interesting characters as well. And there’s Wilbur, who sympathizes with the refugees and helps them ways only he could…

The tempo of the story is slow and calm, the excitement comes more from the characters’ personality than the actual events. Cool guys all, the reader will love them, but overall the book is more romantic or melodramatic than exciting. The boat is interesting too with the steam in the walls, the many levels, halls and rooms… The chapters’ style is unified, the same slow waves over the journey. I’m not sure it’s a good entry-point to the Wild Cards universe – the beginning would be strange with weird guys and the zombies, but for a #24 it’s very good and recommended to read.