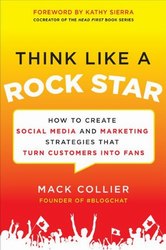 It’s an interesting new way of marketing based on the behaviour of the rock stars; to concentrate only on the committed fans of the company. The book shows how to do it and which the benefits are.

The author illustrates his idea in a coordinate-system, that shows the fans based on the level of enthusiasm. First of all, there are many people who aren’t customers yet. But there are also the customers, and they are concerned more or less about the product. The book is about this latter group, called the fans, which is the most engaged group of customers. They show their commitment to the others, for example on internet forums or social sites. The author said that it would be a benefit for the companies to pay more attention for the fans despite of marketing for those who probably will never be customers.

Obviously the different target group needs different behaviour. There are examples in the book which tricks and ways the rock stars have, and the author shows how a company could act similarly. It has to identify the fans, search for and maintain the connection with them to serve the interests of the company. The book shows the theoretical background of this kind of marketing and explains the benefits as well.

The basic idea and the pieces of advice are great, but the book generalizes, says too little about the specific areas. All the companies and products have their special and different fans, and the hard question is how the company could specialize his marketing for his special fans. The book would require much more special advice about rock stars and companies as well. For example it’s a kind gesture and an interesting story about Lady Gaga who sent pizza for her fans while they stood in the line, but in this book it would have been more interesting to investigate the littlemonsters.com social site, what Lady Gaga created for her special fans. Or how could we interpret the fact that many fans are in love with the rock stars, or how could a company create something like a hit song?

The ideas shared are interesting, but the spread of these wouldn’t be enough for an average article. The author filled the book with many repetitions of his thoughts, he introduces, negotiates, summarizes and later repeats all of the ideas with little differences.  Some of them were repeated 7 or 8 times in the book.

The reader has to consider the ideas further alone for his company and products. Even of this should be a problem – the basic advice is good, useful and practical, but the book gives only the idea, this is less than a guide or a really finished book.