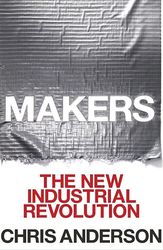 Chris Anderson’s previous books (Free and The long tail) were brilliant, partly because he discussed two clear and unequivocal topics. Both of them could be reduced to an analysis of the math function: 1/x – Free said that the bottom part was so close to zero, if it was a service, then it would not worth to ask money for it, and Long tail explained: the bottom part is really equal to the higher part. Two clear and understandable, math supported statements, which explained very well the world success of the web-companies like Google, Facebook and Amazon. The topic of Makers is less clear and there isn’t any beautiful math function that helps the author to demonstrate his statements.

The starting point is already strange: there aren’t any successful company or interesting phenomenon from the 21st century, but there is the grandfather of Anderson who made a special device to sprinkle the grass behind the house. Anderson was talking too much about his personal raptures, passions and his family in the first half of the book. I agree with him that the 3D printers are great; even so I don’t plan to print my personal objects at home anyway. Nor Anderson mentioned any interesting or real example for this, just furniture, grass sprinkles and games – in the reality of 2012 all these things are made in China cheaper and I don’t want a 3D statue of my head either.

After that Anderson summarized the Industrial Revolution from the 18th century, tried to find similarities between then and now, with a little success. I don’t think a company what works in Manchester with 3D printers should be a real indicator for the Third Industrial Revolution…

But after all of these indistinct statements Anderson found the right way: he wrote about how the internet changed the product manufacturing for the big, the middle and the little companies and the individual handymen. Some of the statements had been explained better at another great book in the same topic: Wikinomics, particularly the part of the big companies, but Anderson is right too, and he updated the coverage with the actualities of 2012. The part covering the small ones and individuals are also great: there are methods, materials, communities, manufacturing companies, software and hardware tools for making things. All of these thoughts are clever and usable for the little companies and for home handymen too.

Even so there are strange things in this part too, for example according to Anderson it is great if Chinese steal, copy and sell your product, because in this way the product gets to a bigger audience and you can concentrate on your premium products… Or you can involve the Chinese software developers for your company (exactly how Wikinomics explained it).

In this book Anderson failed to interpret well an other interesting phenomenon – this was explained much better in Wikinomics. This book is so much about Anderson’s personal interests, even so this should be useful and interesting for readers who want to make not bits, but atoms…