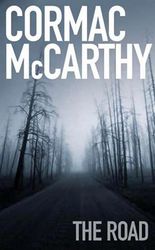 I love apocalypse-stories: The stand from Stephen King, Blindness from José Saramago, The book of Eli, I am legend – it’s a trendy theme in literature and in movies too. In The road something happened whereby the whole Earth, and the entire population, people, animals and the nature itself was burned, only some people survived. All of the critics talk about a nuclear war, but there’s not even a hint of a nuclear war the in the story, just the remains of the fire everywhere. There isn’t enough food, just a little that was hided in houses or some apples under the trees.

A man and his son lives in this world, they walk on their road, towards south, therefore the reader always expects something new: life, warmth, food. But the north – where they are now – is very monotonic, everything is black: the ground, the air, the sky and the clouds.

The essence of the story is their travel in this distressed world. They fight for the food, fight for the safety in the nights, and fight against other people, those who are commonly cannibals. Their travel, the deserted houses and some cannibals are the continually changing elements in the book, however it isn’t boring, the reader is in a fever till the end of the story.

The relationship between dad and son is very authentic and touching, it would be obligatory for all the parents in the world to read this book.

Unfortunately at the end we don’t experience any kind of catharsis, there is not much fantasy in it, exactly the same way there wasn’t any fantasy at the end of Blindness. Another correspondence is the absence of commas and punctuation, except for the points at the end of the sentences. It is artistic, but rather embarrassing.