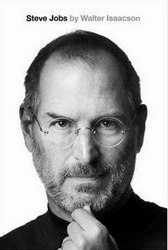 Steve Jobs’ biography was a great surprise: it is not prejudiced, there aren’t too many overstatements, but rather entertaining, and it revealed exactly, what a leader and what a man he was.

The book is based on many interviews, where others tell stories about Jobs, and after that he replies. The author talked with acquaintances, relatives, family members, business partners, business competitors, and wrote the book based on these conversations and in the meantime citing them.

The first surprise is that the author didn’t want to embellish the truth, but on the contrary, he wanted to tell the truth even if it is very unpleasant for Jobs. He was smelly, arrogant and violent – a real jerk, but he could be sensitive, and of course he was very clever. The summary is so disadvantageous for Jobs, it’s hard to understand how people could work with him anyway. (It was easier to him: in his thirties he was already a millionaire and the CEO everywhere – except at Apple for a short time.)

The book is detailed enough, the author wrote decades of stories in a picturesque style too, he worked much to map the whole life of Jobs. The technical details are clearly written, overstatements just rarely can be found, which is fully understandable as he spent years with Steve Jobs… It is fair to contrast different opinions, but the Apple-Microsoft antithesis was mentioned many times more in the book than it is needed. It’s an editorial problem, and it is not too relevant after 2010, but the truth is, that it was one of determining essences of Job’s life.

It was a surprise to take a visit behind the scenes, to get to know how they discovered the possibilities in the IT-market. Jobs’ passion is interesting too, for example when he wanted to simplify his breathing machine in the hospital… There are more sensitive details in the book then needed – these were important beforehand because of Apple’s future, but personally the reader is not interested in the details of his pancreas cancer. Maybe the fans are interested in it because the secrecy was a feature of his personality, he didn’t want to take care of his illness, but it didn’t characterized the company.

His personal interviews, presentations and Apple’s advertisements can be seen on Youtube of course, for example the Macintosh-ad at 1984, or the announcement of the iPhone, these are worth to find during reading.

There are some proportionate chapters about Jobs’ private life at the beginning of the book, but after their marriage with Powell, this topic was pushed to the background. Maybe a well-working marriage is not too interesting for the author, or maybe Powell was more self-contained then the others. But at the end of the book there is a chapter about their children. It’s great, because we can get to know a whole new side of Jobs’ personality.

The book is a great surprise in every respect, but mostly because it gives a real picture about the deified CEO, that is still interesting and immersive.