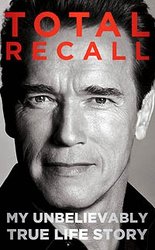 One book is not enough to show Schwarzenegger’s whole life. There are long books about less interesting people’s life, compared to them, the life of the bodybuilder world champion, the world-famous movie artist and the governor of California is so unbelievable, that he can’t summarize it in one book himself.

The book is basically fitting well into the line of the American politics’ self-biographies: well-edited, there are great stories in it, but thoroughly politically correct in all respects. We take this for granted when the author is a leading politician, but more sincerity in the book would have been better, and we can not understand the secrets of his successes from funny stories.

The book begins with his childhood in the little Austrian mountain village. In other cases these are the most boring parts of other biographies – who is interested in the childhood of the author? But Schwarzenegger and his editors chose relatively interesting moments, which are funny or made an impression on him. For example Arnold obviously should thank his parents for his single-minded character.

Then comes his body-builder successes, and his first million dollars – do you know that Arnold had been a millionaire before the Conan, the barber movie? It is really unbelievable that he achieved everything in his life what he wanted. The sporting and real estates successes have already been interesting, and just after that he started to tell his stories about his film career. We can see that he worked himself upper and upper continuously, he was patient enough to wait for the bigger and bigger roles, prepared extensively for his parts and worked much on the advertisement of the movies to make them big hits in the cinemas. It is clearly visible what a strange idea it is to make a film about a robot, which was sent from the future to kill somebody, and which has only 18 sentences in the whole movie… His fans are going to be satisfied with the biography, there are many great stories about his films.

He emphasizes from the first time that he is a republican, but he doesn’t thoroughly explain his opinions, even when he criticized George W. Bush and praised Obama. He also wrote much about his 8 years as a governor, but I felt here particularly that he just told some stories, but didn’t analyze his life. His body-builder successes were analyzed more deeply than the political, but I would be interested more in the last one…

Of course, if somebody is more interested in the body-building topic, he or she may feel the opposite – Schwarzenegger was so amazingly successful in all the fields of his life that could have been analyzed more thorougly. But the book is not actually short, and we could understand from it, how great a human life can be, even tough it started in a mountain village in Austria. We get some information from his personality’s dark side and a few contradictions of his life at the end of the book, but Schwarzenegger is still a role model for a lot of people in the world – it is exactly understandable from the book, why it is so.