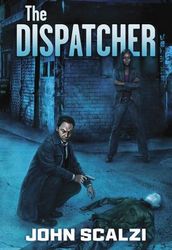 A short novel with an interesting base idea, but the story just a conversation-format description of a strangly changed world and a strange profession in it.

The base idea is interesting: all the murdered victims survive, they wake up in their home, in their bed, with a little headache, with a modestly improved health. At least almost all of them – every thousandth victim will be really dead. This thing changed in the actual world a while ago, and some guys, the dispatchers are specialized to kill dying people purposefully, because this way they could survive almost all the time.

Our main character is a dispatcher, who assists on a dangerous operation in a hospital at the beginning of the story. The operating doctor hates these guys, which shows an illogical point of the world at once: if these guys help the victims to survive, why many of the others hate them so much?

After the operation a police investigator woman asks him to help her to find his colleague, another dispatcher, who disappeared a day before. The story is about the two of them, talking to each other on many places around the city. Tony tells the policewoman how dispatching people happen in illegal cases: the format is mainly discussions, but their topic is more or less a description of the job. They are talking to each other and talking to other guys, trying to find who or why would rob Tony’s colleague.

The world is not developed enough – they are talking about the religious or scientific consequences of this change, but even their society does not really understand it. Nor will the reader. Another problem is that the story does not touch any of our world’s real problems or challenges. It’s not even a love story: Tony and the policewoman are flirting with each other, but nothing serious happens between them. And at last, it’s not funny, unusually from Scalzi – it could entertain the reader for a while, at least it’s short, but it’s not on the level expected from him.

John Scalzi: The Dispatcher
Subterranean Press, 2017.
(I got an advanced copy through Netgalley.com)