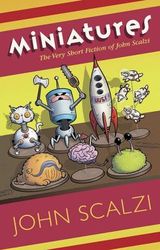 Short, funny, mostly sci-fi stories from the author of the Old Man’s War series and Redshirts – and some of them are really great.

There’s not so much common in these 18 stories. Their genre is mostly sci-fi, there are aliens all around, meetings with aliens, humans and aliens live together etc., but there are simple jokes played on airplanes as well as some alternate histories and even a poem.

The best ideas were in which aliens are already all around with humans in Earth. People of the streets telling funny stories about how they met with alien animals, there’s a guide from shop-managers about how to handle alien customers, how they celebrate their holidays, or readers’ letters asking for advice, how to work together with alien co-workers or bosses. These are imaginative and funny stories, Scalzi was joking freely around aliens, these are the bests of the collection.

It’s also very good when Scalzi personalized things like Planet Pluto or smart gadgets in the house, which are making embarrassing gossips about their owners… I would like to read more stories like these.

There are less funny stories as well: a superhero-booking agency, which seems a good idea, but the result is maximum average. There are alternate histories, where young Hitler dies in many ways, then yogurts take over the world, and supercomputers take over the world – these are just not funny enough. There’s a Redshirts-mashup, and a poem…

Overall I found nine stories good from the eighteen. Nine short stories (2300 words maximum), from a material point of view, it’s only worth it for the really dedicated fans. But from a dedicated fan’s point of view, getting nine new, good stories from Scalzi could be great, so I suggest them mainly for his fans.