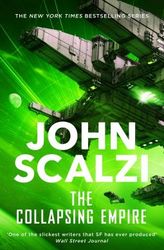 After John Scalzi finished the Old Man’s War-series, he started another, brand new, huge space opera. The Collapsing Empire is about people in the space again, now without aliens, and it’s much more funny – actually a long, endless joking around space, power and survival of humanity.

At the beginning of the book I was afraid of the many story lines, because new characters were introduced in every chapter. But eventually two main story lines were formed: the first is in the center, the other is at the endpoint of human civilization. The story is played in the future, where people live in different junctions of space in big, artificial space stations. This is the Interdependency, where these human habitats are connected by the Flow, in which space ships are able to travel, and humans are able to live there only because the ships are able to transport goods between them.

The center of this universe is the Hub, where many routes of the Flow meet. There lives the „emperox”, the chief executive of humanity, our first main character, the actual successor of the previous emperox, a woman, who never wanted to be in such position. But she will be enthroned anyway, through funny and entertaining scenes.

The other important place is the actual endpoint of humanity, the End, actually a real planet, where only one route of the Flow connects, but where people would be able to live without outer help. The dramatic problem that the Flow will change in the near future, many routes will collapse, and people couldn’t live on the habitats without the transported goods – except on the End.

The book’s style is first of all: funny, Scalzi makes jokes everywhere and in almost every situation. Those who liked the funny parts in the Old Man’s War series will like this book as well: it’s funny how Cardenia will be crowned to emperox in a long and boring ceremony, it’s funny how Kiva makes sex with, basically everybody, until she needs to make business, all the spaceships have funny names etc. There’s some intrigue between the big trade houses, and of course the intrigue will reach for the emperox too. There’s some fight for power, there are politics and some action, but these are not the definitive features of this first book.

A much more definitive feature of the book that all the leaders of this universe are women: the emperox, both the leaders of the trade houses, the leader of the church, the captain of the spaceship in the prologue – all of them are free, powerful, smart – and funny – women.

I wouldn’t say The Collapsing Empire is better than Old Man’s War: I enjoyed it more, but their style are different. Old Man’s War was about important questions, philosophy, politics and the existence of humanity (and some jokes). This book is lighter: there’s a space and political war around, but it’s basically about jokes in an interesting, new sci-fi universe. Obviously it’s worth a try – and you can read the Prologue and three more chapters for free at tor.com.

John Scalzi: The Collapsing Empire
Tor, 2016.
(I got and advanced copy through Netgalley)