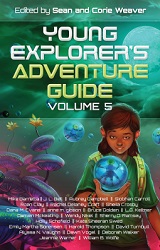 The actual collection for 2019 is similar to the previous in many aspects, but the overall quality is lower and the overall concept is not a winning idea either.

Also many of them are orphans, and the other base idea for the stories that those are played on zeppelins. So the book is full of half-legged orphan girls, who live in zeppelins – it’s OK for one story, or some, but it is constrained and strange that all the independent authors were forced to use this similar setup.