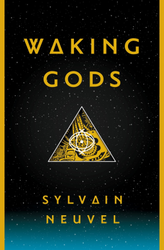 The second part is like a bridge between the first and the third book: the main story lines are continued, and only some personal issues are finished.

At the beginning of the book a second robot appears in the center of London. It does nothing for a while, and the whole world – included the main characters – tries to find out what to do, or find out what this second robot wants. After a while the British Army goes around the robot offensively, and it clears out a quarter of London as an answer…

The structure of the story is the same as in the first part, it includes interviews, personal diaries and operation logs – it’s interesting how these guys are able to broadcast their movements in detail from the middle of the battles…

The personal stories are continued as well: Rose worries about her existence, the nameless guy tries to get help from Mr. Burns, and Kara and Vincent attack the second robot with Themis. They win, but they don’t have much time to celebrate, because after their victory twenty-something new robots appear in the main cities of the world.

Some new information will be gathered about the aliens, and about the characters as well, included the nameless guy. Unfortunately some of them die – the personal stories in the book are touching. But the deceased characters’ position will be replaced soon, so the reader will meet new, exiting characters too.

The robots are attacking again and again, Rose tries to find something against them – but at the end of the book the situation essentially remains the same as it was at the beginning: we don’t really know what the aliens want here. The second part does not solve this main question – but it’s a good, funny and exciting transition to the third part.