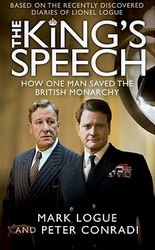 The book version disappoints the reader. As opposed to the movie there isn’t any feelings, drama in it, just a simple narrative of the relationship evolving between the king and his speech therapist, and a saga without real stories.

The author is the grand-grand child of the therapist, so the story begins with the introduction of his family. Logue lives in Australia, he works as a speech therapist, and makes performances. There isn’t any exact information about the performances, about how Logue speaks to the audience. Like a humorist? Like a politician? He and his wife make a great journey around the world, and after that the family moves to England, where Logue sets off a speech-practice, like a doctor.

Prince Bertie’s story is the second, like he is the second duke of England. The book is exciting like an encyclopedia, it’s not a real novel, but a raw material for a real story, maybe for a movie…

Prince Bertie worked with many speech therapist without success, and he had many fiascoes during his public speeches. On the tenth occasion he starts to work with Logue, and it works out well, Logue successfully improves the prince’s speech. Bertie practices quite a lot, and makes better speeches in front of audiences, moreover he becomes a great orator.

The prince is cured, accordingly the relation with the doctor setting just a polite gesture. After all, when he becomes the king of England, he has to speak a lot better, so he asks for the help of the doctor again. The king is very exited before all his public speeches, but all of his speeches will be great – the book tells us a lot about these situations.

The one and only interesting part of the book, when the therapist visits the king before the king’s speeches in the Buckingham Palace. The royal family is there, the little Elizabeth walks around them and chats with the doctor. The relationship is limited for these occasions, most likely Logue was just one of the supporters of the king. That’s not bad, he was the speech therapist of the king – but it’s very slim for a real novel.