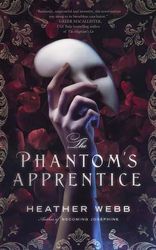 When the story of the phantom of the opera was told, both Gaston Leroux and Andrew Lloyd Webber left out many-many details. We don’t know how Christine was hired to the opera, how the phantom discovered her or where did she live. Furthermore, her role was mainly passive, she was instructed and robbed by the phantom, loved by the vicomt, promoted by the directors – all of these are changed now.

The novel of Heather Webb made Christine the main character, the whole story was told again from her point of view. Her behavior is different as well: from a drifting, helpless girl she becomes a clever, active woman who got her own life in her own hands – as a real feminist.

Being a feminist – it would not be a problem, I welcome every independent, strong and active woman character. The problem is that it was not a coincidence that so many details were left out from the book and the musical as well – these were just not interesting enough. For example, her childhood, her father, the death of her father, where did she live – these information are simply boring. The book is full of such irrelevant details like Christine mourns, or goes to the local market to buy some food to the household(!), and we are the quarter of the book when Christine even enters the opera house…

The original story is brilliant because it’s mysterious, dreadful and romantic at the same time. The secrets are amusing, because the reader completes the story himself with his own imagination. But Heather Webb explains every unimportant detail, which takes every mystery and excitement out of the book. Nobody is interested about how did she applied for the job (participated on a casting and she was selected!), or how the phantom teaches her to sing in the dressing room (warms up her voice and practices a lot!).

There are new story-lines too, for example Christine likes to be a conjurer, even likes to be a conjurer more than a singer!… And while Erik likes to make magic too, they will hang out easily when the phantom robbed the girl. Another unrealistic line that the phantom had made public shows(!) as a conjurer before, and a beautiful woman fell in love with him! Until now we thought Eric was such an ugly guy that everybody was scared to see him, and he had to hide from people in his whole life…

In the book Christine got a scientist friend who supports her, take her to the casting and turns up regularly. The reader suspects that he is in something wrong, and well, the author created a whole new crime story around this scientist guy, Christine and Eric. And finally this strong, clever and active Christine solves every problem, and the previously unconquerable, dreadful, killer phantom will be dragged out from his opera house in handcuffs… Christine Daaé is a strong, spotless feminist in the XIX. century – but the book became just a mediocre crime.

Heather Webb: The Phantom’s Apprentice
Sonnet Press, 2018.
I got an advanced copy through Netgalley