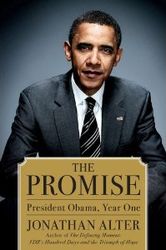 The book promises background stories about Obama’s White House by a confessedly narrowed author. The promise is fulfilled, there are many personal information about Obama, his family, his colleagues and their decisions. At the same time the quality of the script is very low because there isn’t real distance between the author and the president, Alter fully identified himself with Obama.

The selected topics are good, the author wrote about Obama’s most important decisions. The book begins with the previous time of the election, when Bush co-operated with Obama and McCain equally, so both of them could prepare for the presidency. Obama studied the economy substantially, he was more prepared in it than McCain. There was an important negotiation, where Obama was better than his opponent – so the book showed McCain like an unlucky idiot, based on this one event. In the real world McCain was much better than Obama from other point of views, but the book doesn’t talk about these.

The book is full of gossips and whispers that the author had heard in background-talks. He wrote all of them without thinking about the importance of the things. For example all of the live-chats are full of profanities. It is likely that nor Obama and neither his staff curse more than other people, but the book shows the F word is continually present in the Oval Office. Another example: Rahm Emanuel was an executive advisor of Clinton, and he is the chief of staff in the White House now, what is likely the second important job in the world. The author depicts him like a violent bounder, who continually says profanities, and just reads his Blackberry while the president talks to him. Maybe all of that is the part of the reality, but presumably not the most important traits of them.

It was good to know who Emanuel is, thanks for the television-series The West Wing. But the book doesn’t make it clear who is who in the White House. The author presumed all the readers to know exactly the titles and scope of activities of the characters. Because of that the average reader always needs to use Google while reading the book – I was mixing Obama’s executive advisor with his mother-in-law all along while reading the book. OK, it’s all the same, both of them was in the White House all the time and gave advices…

It’s embarrassing that the author is disdainful with all of the characters except Obama. It is maybe understandable with the republicans, but very strange that it happens with all of the democrats too. Only idiots work in Washington except the genius president. Bill Clinton is a hissy, who made incoherent decisions. Carla Bruni asked Michelle an improper question – that’s the only thing about France, and the author assigned Weimar as the capital city of the Weimarer Republic.

It is a fact that Obama was in a hard situation between two wars and an economic crisis, and he wants a medical reform too. The book tells many interesting things from the background. But the author was disordered by his fellowship with the president – a statement wouldn’t be true just because Obama said it personally.